Axanthism is a color mutation in snakes. It prevents them from producing yellow pigmentation.

Many Axanthic Ball Pythons are also bred for different pattern morphs. The most popular varieties are the pied and pinstripe.

If you want to keep this prized morph, keep reading to learn about the different patterns, bloodlines and history.

What Is An Axanthic Ball Python?

Axanthic Ball Pythons are a color morph of the Ball Python. Axanthism is a recessive color mutation that reduces the number of yellow pigment-producing cells in a snake.

The first axanthic morph was bred in 1997.

Most axanthic pythons today descended from one of four bloodlines:

Species from the VPI bloodline retain their black and white color throughout their life. The other bloodlines normally develop a brown coloration as they age.

Breeding pure Axanthic ball pythons is very difficult because the gene is recessive. It requires two parents that are either homozygous recessive or heterozygous:

Because of the difficulty in breeding this morph they are very rare. Normally this species is bred with other designer morphs such as the clown or albino.

Most axanthic pythons descended from one of four bloodlines. 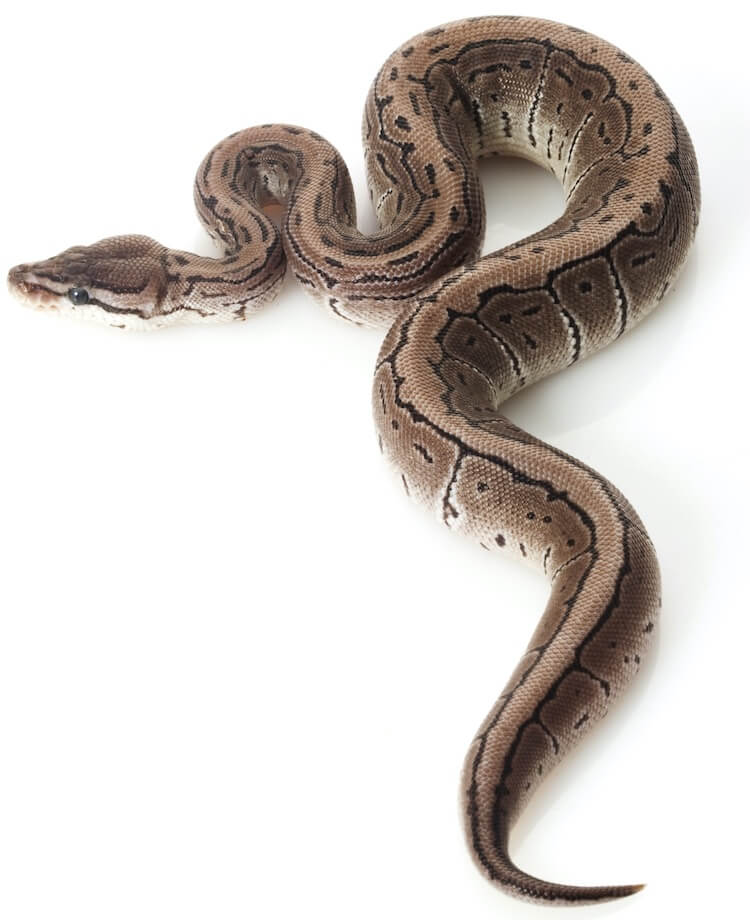 Axanthic Ball Pythons are easily identified by their monochromatic colors. They have the same wild-type Ball Python pattern with shades of black, white and gray.

The Axanthic morph replaces the deep brown color with shades of white, silver and gray.

These colors vary depending on the bloodline and morph quality.

VPI morphs are the most desirable because of their complete absence of brown, yellow and tan. They have white bellies with smooth silver-gray sides that fade to a light silver spine.

Hatchlings are typically around 12 inches long and weigh 49 to 62 grams. This species of snake grows rapidly as a juvenile.

Axanthic Ball Python morphs can be bred with other morphs to create unique combinations of traits. It is common for them to be mated with spider, piebald and pastel morphs.

The following is a list of specialized Axanthic Ball Python morphs:

Axanthic Pied Ball Python
Pied Ball morphs are completely white with patches of silver and gray markings. They may have very few patches or a mottled appearance depending on the individual. The best form of this morph has well defined patches with crisp edges.

Pastel Axanthic Ball Python
Pastel Axanthics are lighter in color. They have white bellies and brushed silver sides. They normally have black markings that fade to tan or cream on the spine. The best pastels have minimal shading on the sides and are a uniform light silver with darker markings.

Black Axanthic Ball Python
Black Axanthics are the opposite of Pastels. They are a dark smoky gray. Their markings do not lighten near the spine and they retain their color into adulthood.

Red Axanthic Ball Python
Red Axanthics are a color and pattern morph. These pythons are normally a light reddish cream color. They have a clear stripe down their spine, a light head and alien head patterns along their sides.

Axanthic Spider Ball Python
The Spider is a pattern morph that has thin lines on their back and sides. These lines give the appearance of a spider’s web and replace the traditional dark blotches of wild type Ball Pythons.

Axanthic Clown Ball Python
Clown pythons have a unique pattern that is most prominent on their head. Every clown python has a wide black stripe along their back. Axanthic Clowns are lighter in color than pure Axanthic pythons.

Axanthic Bumblebee Ball Python
Standard Bumblebee morphs are bright yellow and white. The Axanthic version has a white underbelly that transitions directly into a light silver. This morph has dark vertical stripes and spots without a dorsal stripe.

Super Pastels have broken gray stripes that fade to white close to the spine and belly. These stripes can range from dark gray brown to pale cream.

The Stormtrooper is a one-of-a-kind morph that was hatched in 2016 by John Dague. It was bred from a Super Pastel and Axanthic and has a pure black and white pattern.

The Axanthic gene is inherited through recessive genetics.

In order to have a 100% clutch of Axanthic Pythons both parents must be homozygous.

The first Axanthic python was purchased in 1991 by VPI from an importer who captured it in Africa. However buying two homozygous morphs can be expensive.

Some breeders use a heterozygous Axanthic python for one or both parents.

A heterozygous python only has one copy of the Axanthic gene – not two. This means their parent will not show the Axanthic color.

Mating a heterozygous with a homozygous snake gives a 50% chance that a hatchling will inherit both necessary genes and be Axanthic.

What you look for when purchasing an Axanthic ball python will depend on what you are planning to do with it. If you are just looking for an exotic pet then do not worry too much about bloodline. However, usually people who buy Axanthic pythons want to breed them. That brings up a few extra considerations.

If you are planning to breed this morph then you should decide on the specific traits you want to accentuate. This will help you pick a bloodlines that matches your goal:

If you are buying an Axanthic Ball Python to breed remember the different bloodlines are incompatible with each other.

It is also possible to confuse some morphs like Super Pastels, Cinnamons and Ghosts for Axanthic Ball Pythons. If you are unsure of a python’s genetics then always ask the breeder rather than assume.

Not every bloodline is available for sale.

The Stormtrooper python is an example of a species whose genetics are unknown and have not been replicated. The Axanthic Firefly was also recently discovered and is very rare to find.

How Much Is An Axanthic Ball Python?

The price of an Axanthic ball python will depend mostly on their pattern.

Prices can range from $300 for a standard Axanthic morph to over $5,000 for a clown or piebald pattern.

Axanthism is a recessive color mutation that results in black and white snakes.

Species from the VPI bloodline retain this black and white color throughout their life. The other three bloodlines normally develop a brown coloration as they age.

This morph is rapidly growing in popularity thanks to super varieties such as the Stormtrooper and Axanthic Firefly.

The full extent of this morph’s genetics has yet to be discovered.

Are you planning on breeding an Axanthic? Let us know below.

Looking for a life-long pet reptile? Then look no further than a ball python! This snake is perfect for first-time owners as well as being great for enthusiasts looking to add to their collection. These popular snakes are hardy, easy-going, Read More →

The eastern indigo snake is a non-venomous snake with a blue-black dorsal and lateral scales. Eastern indigos are native to southeastern regions in the United States, including Florida and southern Georgia. These snakes are common in sandhill habitats, cane fields, Read More →

Red Tail Boas are one of the most popular pet constrictors along with Ball Pythons, Carpet Pythons and Rosy Boas. They are easily identified by their vivid red tail markings. These constrictors are a large pet snake and can reach Read More →